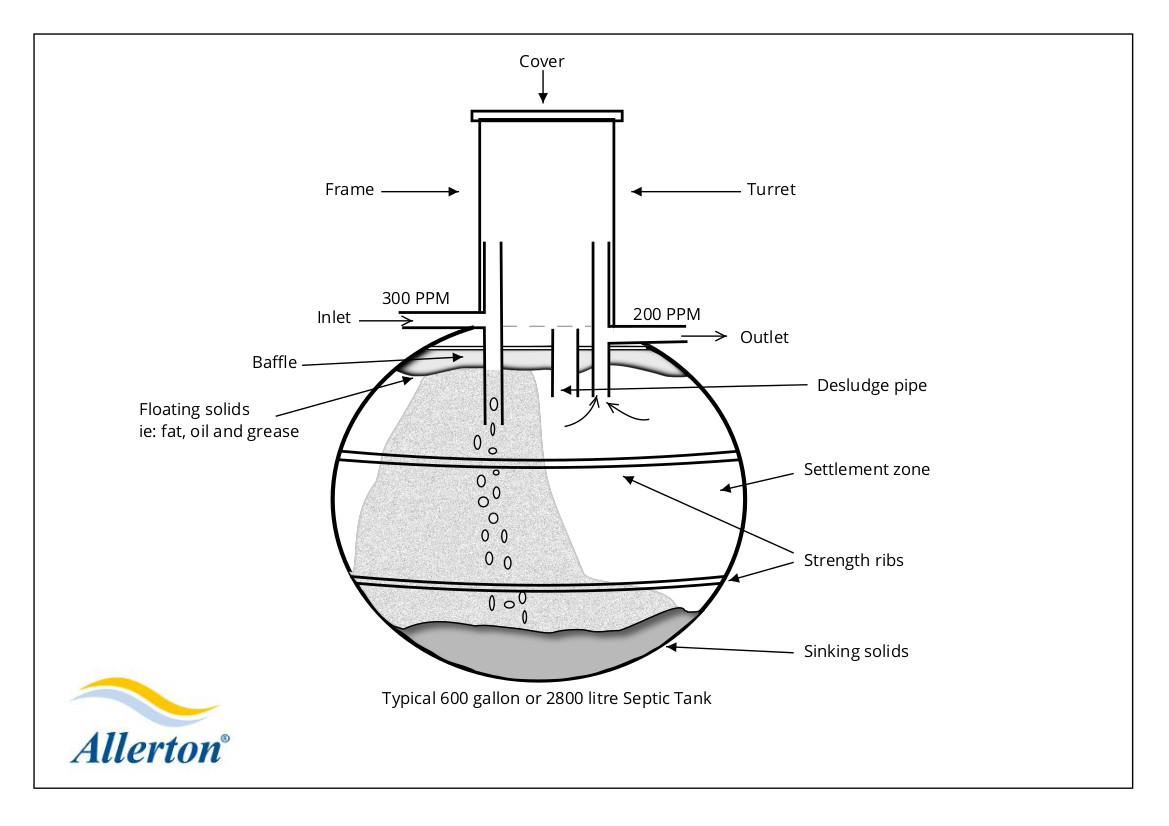 GRP Septic tanks replaced brick built septic tanks about 40 years ago. GRP stands for Glass Reinforced Plastic and is another word for fiberglass. At Allerton we use this material in nearly all of our products. Pump stations, sewage treatment plant, sample chambers, and kiosks for example are all made with GRP.
Fibreglass really is made of glass similar to that in windows or kitchen drinking glasses. To manufacture fibreglass, glass is heated until molten, then forced through superfine holes. This creates glass filaments that are extremely thin—so thin, in fact, that they're best measured in microns.

These flexible filament threads can be used in several applications. For example, they can be woven into large pieces which look like rolls of coarse cloth.The final application is dependent on the length of the extruded strands (longer or shorter) and the quality of the fibreglass. For some applications, it's important that the glass fibres have fewer impurities, however, this involves additional steps in the manufacturing process. Other materials can be used to give exceptional strength and at the same time be much lighter... Kevlar and Carbon fibre are examples. They are expensive to manufacture and are not needed when it comes to making tanks and containers as GRP is the economic material of choice.
We will come to these later but it is worth noting that glass fibre in the form of hundreds of bobbins in a factory combine, and are woven together to make high pressure pipes. It is also possible to force large diameter pipes under a busy road or railway line, without obstructing traffic.
The versatility of GRP means that it can be used not just for patching dents in a body of a car, but in the forming the bodywork of the car in the car plant.

Large volumes are consumed by the building trade and construction too. Major roadworks these days have to have all the rainwater collected and treated before being allowed to go into the river system. These tanks, the size of a coach, collect the runoff from vast acres of road, retaining oil and fuel as well as tyre pieces, storing the polutants before the water can be released to the attenuation system.
Attenuation reservoirs are the shallow ponds you see for a day but disappear after a day or two. Their purpose is to attenuate, that is to slow down, the rate of road run-off into a small ditch. So they save small bridges from water erosion and indeed flooding of areas downstream. These huge tanks, bright yellow as a rule, are seen only for a short time, before they are buried out of site and out of mind. No wonder roads cost so much to build!

Where brick, concrete and steel were the materials used before to build underground tanks, they are now GRP or fibreglass. After the second world war someone realised that by mixing threads of glass with resin a strong light material could be made. As glass is resistant to most corrosive materials the glass reinforced plastic (GRP) could be moulded to form any shape, and in the case of septic tanks, used to separate solid sewage from the liquor.

60 years ago Klargester used this material to make GRP septic tanks and later cesspools and eventually many of the huge tanks we see transported on the roads today.

There are septic tanks functioning well enough after 50 years but it is the Gravel soakaway which fail. They simply fill up with black organic matter and 15 years is about the average life of the soakaway.

Conversion units such as the Allerton ConSept use blown air to encourage aerobic bacteria , transforming the septic (anaerobic) regime into an aerobic one where the treated effluent can, with Environment Agency permission, be discharged into the river system. If no ditch is available, the ConSept utilises the air to lift, by siphonic action, the cleaned water to the surface. A shallow soakaway is far more effective than one deep in the ground.

It is worth noting that raw sewage has a value of about 300ppm. What comes out of a well maintained septic tank is 200ppm of horrible black water, but water which carries two thirds of what went into the tank!

Generally, sewage treatment plant (and the ConSept too) have to produce a final effluent of just 20ppm before it can go to the River system. Rainwater is about 5ppm.The ConSept works well in brick septic tanks but apart from the difficulty in removing the GRP Septic Tanks baffles, once inside the tank it is as if you have a brand new sewage treatment plant. Half the price and no machines on the lawn!

There is a downside for this of course: a capital cost of about £3000 and running costs of around £300 which includes servicing by Allerton, de-sludging every 12 to 24 months and electricity.