What are Septic Tanks?

Septic tanks (ST) are used to deal with sewage water from lavatories, kitchens, bath, showers, and wash basins. They are not meant to take rainwater as large volumes of rain water can wash all the carefully stored solids out into the soakaway!

The design of these tanks has often been modified to suit ground conditions at the time of construction. Their depths often not as planned due to  hard rock or wet running sand or too much water ingress creating excavation problems. Once circumstances affect design the purpose of the ST is compromised. Ideally, a ST should have two chambers, the first twice as big as the second. Often, they are constructed with one chamber only. Another compromise based on cost!

The consequence, generally not understood by all, is that the amount of solids carried out into the soakaway is far more than it should have been. The ST is designed to have about 600mmm (2ft) of solids in the bottom. More than this and the tank is full! Once it’s full of solids it should be emptied immediately.

The height of the inlet pipe should be 1.4m above the tank bottom. This allows for a settlement zone, 800mm deep and with a volume of water which allows the incoming effluent to gently sink to the bottom storage zone. The speed of water through the tank, if allowed to increase, increases the amount of solids the water can carry.

The solids that do accumulate on the bottom increase in depth and so the speed of water increases, as the settlement zone volume decreases, carrying most of the solids, including fine solids scoured from the bottom into the soakaway or drainage field.

So, only a third of solids are retained, two thirds goes into the soakaway.

Life of a Soakaway

The life of such a soakaway varies depending on ground conditions. Typically, a soakaway will last 10 to 20 years, but 60 years is possible too! While I have described the effect of not de-sludging on the bottom solids, the top crust, or floating solids can be an even bigger menace.

Floating solids are fat, oil and grease, or FOG. It is essential that floating solids do not enter the soakaway. Grease will live in the soil for years and bacteria there do not readily break it down. To prevent this happening, a Tee pipe should be installed on the outlet pipe. This way, floating solids will not simply float out! However, if there is no Tee pipe or it has been broken off, the Fog goes into the soakaway, quickly blocking it.

If the ST has a tee pipe but is not de-sludged each year, then the floating solids layer gets thicker, and so goes over the top of the tee. So again, the soakaway is under attack. Instead of a decent 20 year life, it can have less than say five years. 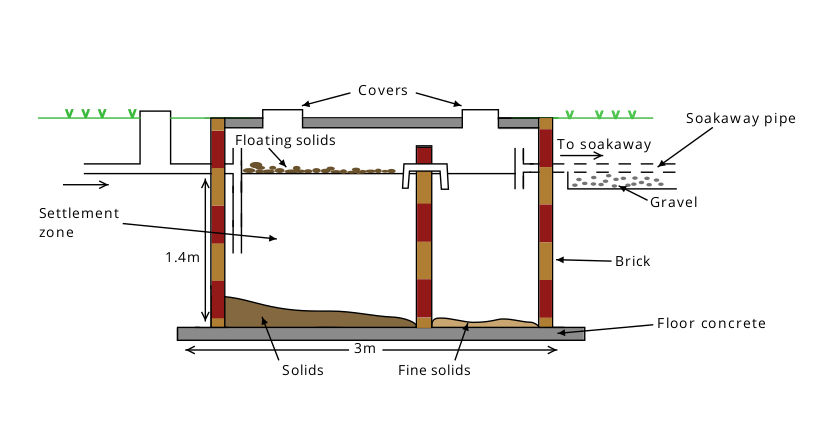 However, nothing appears to happen though as it is all hidden from view, until, that is, the level of dirty water in the soakaway is well above the outlet pipe. Gradually the depth of water increases till all the floating solids go straight over the outlet tee pipe.

Now we have the sludging up of the soakaway speeding up. We may have a few years to go, but eventually the ST and manholes uphill of the tank get filled to the top or near the top.

Solids do not flow properly in water filled pipes. This manifests its self by overflowing at manholes and or ST. After a little time the kitchen waste overflows onto the path. Or the downstairs lavatory will not flush! This is not the time to panic.

The time to panic was years ago when the water in the ST is at the same level as the inlet pipe indicating that the Soakaway was failing. Having it de-sludged solves the problem in the short term but three weeks later, it all starts to happen again.

What can be done? There are many options but none of them cheap.

Much depends on the state of the garden, its size and accessibility for medium sized diggers.

If you get advice quickly you will save real money as emptying it is a very short term solution and not a cheap option either.

Grease and oil should be poured into old bottles and sent to land waste. Fats cling to fats, whether in London’s huge sewers or in household drains and Septic tanks and even Sewage Treatment Plants(STP) are affected.

Rainwater down pipes should be checked, ideally when it is raining, to see if any water is getting into the sewage system

In a few years’ time, very few septic tanks will be installed in heavy clay soils. However, the biggest merit of the septic tank is that it has very low maintenance cost since it just needs de-sluding once a year. With an STP comes the cost of electricity as well as servicing. What do you think about septic tanks? Tell us in the comments below!