The discs in the images revolve dipping into the dirty water and turn into the fresh air giving the aerobic bacteria what they need - that is food, water and air. After removing heavy disc packs from a Klargester Sewage Unit at Scunthorpe steelworks, two Allerton Engineers fitted a new rotor and bearings.

What happened to the Sewage Treatment Plant?

The bearings get greased and serviced regularly, however eventually they sieze up, as they have done in this case. As the mechanism keeps moving, eventually metal starts grinding on metal and the discs seize up. The discs are meant to slowly rotate, dipping into the effluent and then coming round again for air. When the shaft stops, the aerobic bacteria die and the process stops. In order to correct this and allow clean water to go into the river, our engineers had to change the rotor and bearings.

To change the bearings, the engineers have to dismantle them first. They use the rig (porta-gantry system - which is the framework on 6 inch wheels in the images). It wheels along over each section of discs. And by using the chain and ratchet they can undo the bearings and then lift the bank of discs off. They then fix the bottom half of the bearings, replace the shaft and discs, lowering them into position. So they’re now lying on the bottom half of the bearing, allowing the top half to be fixed. Another job done! 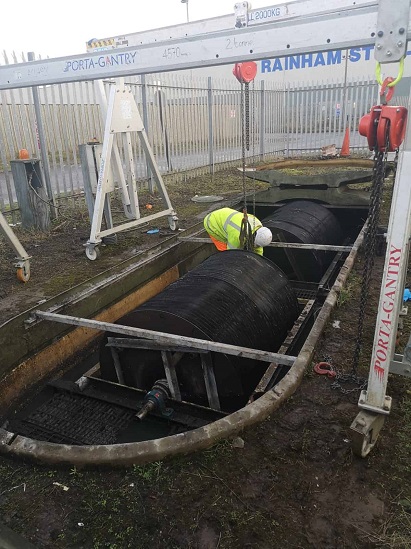 How does the Biodisc clean the effluent?

The aerobic bacteria which grow on the discs as a biomass are deprived of water and food when the discs stop turning. What normally happens is that the bacteria use up the organic matter in the effluent for food and water in order to live, breathe and multiply. The result of this is that the organic matter is taken out of the effluent and produces very clean water. This final effluent can be discharged into the river.

However, without this process (when the unit breaks down for example), the organic matter goes into the river and demands all the oxygen in the river water to allow the bacteria to live and so the river dies (as do all the fish and plants). BOD (biological oxygen demand) is the measure that we use to gauge the strength of sewage, and the objective in this case is to get it down to 20 BOD. The eflluent from this factory is far too strong to go into the river untreated. A river has a BOD value of 5-20 BOD (potentially less than 5), so the work of our engineers is very important.

What do you think about this operation? Let us know in the comments below!